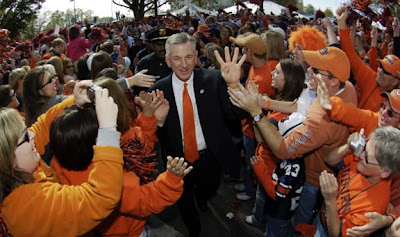 The Birmingham News is reporting that Auburn has fired Head Coach Tommy Tubberville. The Tigers finished the season with a 5-7 record, the worst in Tubberville's ten year run on The Plains. He led Auburn to an undefeated season only four years ago, and had won six straight games against bitter rival Alabama before this year's Crimson Tide 36-0 thrashing. Coach 'Tubs' was 85-49 overall, was Auburn's fourth longest tenured coach, and was fourth in wins all-time. According to the terms of his contract, Auburn must pay him $3 million in 30 days, and another $3 million within one year. Along with Phil Fulmer, Tubberville is proof that when the powerful, influential, big contributing alumni and boosters want you out, you're out. Huge contract settlements are no deterrent to your ouster. It's just a matter of what have you done lately. It does not matter if you're Les Miles, Urban Meyer, Nick Saban, or Mark Richt, if and when you fail to bring home a trophy in a matter of a few years, you're history. They can stick a fork in you, 'cause you're done. You let Mark Richt's troops continue to play 'soft' and settle into a state of mediocrity over a couple more seasons, and he will be out at Georgia just as quick as Phil and Tommy. It's the nature of the game. It's a big money game, and where the stakes are high, the risks are just as high as well. Back to Auburn, I don't think they would have kicked Tubberville out this year unless that had very good reason to believe that Texas Tech's Mike Leach would take that vacated seat. Just a gut feeling...Anyway, good luck Tommy Tubberville. You and Fulmer keep rolling those sevens. And don't get rid of your agents, they gotta be two of the best in the business with those payouts they set up for you two!