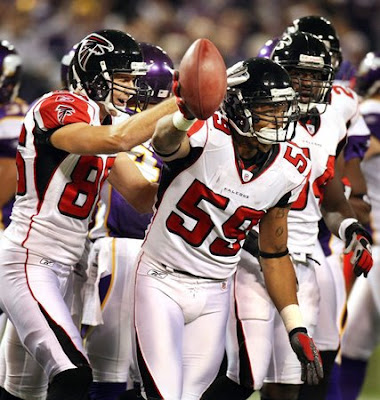 Dallas was in a must-win situation, as was Tampa Bay. Minnesota, the team the Falcons faced Sunday, was in that situation themselves. And the Falcons were do or die more so than the other three. The Cowboys fell to the Ravens on Saturday night, the Buccaneers lost to the Charges on Sunday early, and Atlanta downed The Vikings later that afternoon. The Falcons were the only team who went out and did what they needed to do to qualify for the post-season, and that is win. No backing in for these Birds, they flat out earned their ticket. The most encouraging remarks I read after the game by the Falcon players was that they aren't satisfied with just making it into the playoffs, they want more. There seems to be no complacency with this group. They realize you don't get the opportunity to walk this route always, and they want to make the best of it. They are a scrappy bunch of hard playing over-achievers, and perhaps no team in football runs the ball better than Atlanta. Their rookie quarterback, Matt Ryan, has played all year like a guy who has been in the NFL for half a decade. He is poised beyond his years. The defensive secondary has improved, but I really think they are a cornerback or two away from being a complete defensive unit. They also need more pressure up front. Nevertheless, I would not want to face Atlanta in the early rounds of the playoffs. They will be a dangerous foe early on. If they advance, pure adrenalin and desire will have to make up for some talent shortages for the run to continue. But you have to like the way this bunch of guys play as a team together. They really are all for one, and this flock is flying high!