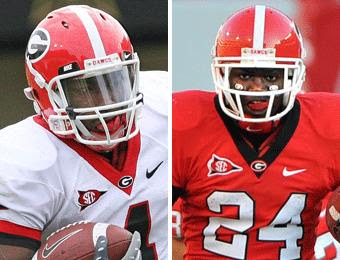 The University of Georgia has had ten running backs rush for 1,000 yards in a single season. They have never had a pair of backs do it in the same season. That however is the 2010 goal of running backs Caleb King (L) and Washaun Ealey. Last season the tailback tandem combined for 1,311 rushing yards. As you can see, they have a long way to go. However, it is "doable" for the two. They will be running behind the most experienced offensive line at Georgia in several years. They are both talented runners who share the workload well together. They both now have game experience and are comfortable with the Bulldog offense. My biggest concerns for them are 1) can they both stay healthy for an entire season, and 2) will they get enough carries to pull off their lofty goal. In 2009, Ealey had 125 carries, while King ran the ball 114 times. Those numbers will definitely have to increase to the area of around 15 totes per game over the span of twelve or thirteen games for each back. Both guys believe they can accomplish the 2,000 yard plateau together. I would love to see it happen, because if the Dawgs are running the ball that successfully, then the scoreboard has gotta be looking good for us.
Posted by Sports Dawg at 11:53 AM