Zach Mettenberger: A Bump in the Road... 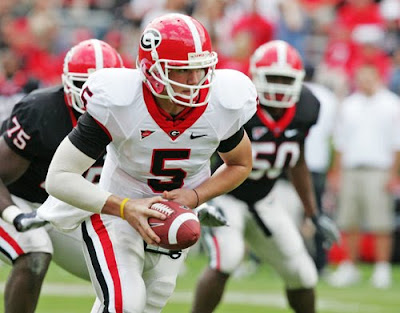 Georgia red-shirt freshman quarterback, Zach Mettenberger has definitely made a mistake. It is a mistake that will cost him, but it won't kill him. He has been charged with five misdemeanor charges related to underage drinking. Drinking too much, too late, and showing too little judgement. Mettenberger is in a three-way battle for the Bulldogs starting quarterback job, and this little incident will cost him at least a one game suspension. So I suppose we now have a two-way battle for the first game starting quarterback position. Georgia has had only one day of spring practice because the university system kids are on spring break this week, thus time for them to party and have fun. There's nothing wrong with that, unless you get caught with a fake ID or two and happen to be a quarterback candidate. He's not the first college football player to run into this negative situation, and he won't be the last. But he will have a price to pay, and how he handles that part of the deal will reveal what kind of kid he really is. He committed the crime, now can he do the time?
Posted by Sports Dawg at 1:19 PM