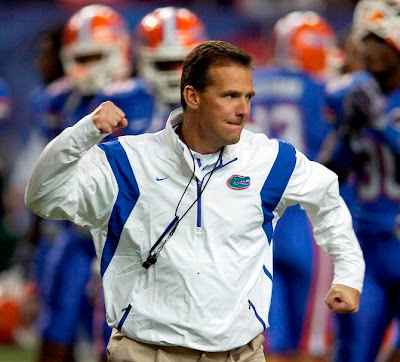 Urban Meyer accused a reporter of being a "bad guy". This label came after the reporter, Jeremy Fowler, published a quote made by Gator receiver Deonte Thompson. Fowler didn't offer his opinion, he just wrote what Thompson said. And for that, Meyer goes off on the guy and threatens him. Thompson referred to incumbent quarterback John Brantley as a "real quarterback", as opposed to former QB Tim Tebow not being a traditional style quarterback. Was Meyer actually taking up for Thompson, or was he still babysitting his true love Tebow? I select the latter reason. As a Georgia fan, I really try to respect Meyer as a coach with a darn good winning percentage everywhere he has coached. However, he really makes it hard for me to respect him as a person when he gives off the impression that he is above everyone and everything. I now think his talk of retirement was a hoax, his leave of absence was a farce, and his claims of stepping back and/or cutting down his areas of responsibility were merely rhetoric. He's either more emotionally healthy than he led everyone to believe several months ago, or his micro-management tendencies dictate and control the actions of his life regardless of the consequences. I think Urban Meyer is an out of control jerk. In fact it's hard to determine if he is in control at all. And I, for one, could care less.
Posted by Sports Dawg at 7:46 PM