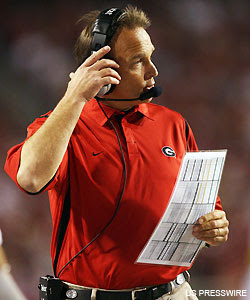 It's March Madness in Athens, Georgia. Translated, it means this spring is Mark Richt's biggest in his ten year career at Georgia. He has an almost completely new defensive staff, beginning with new defensive coordinator Todd Grantham from the Dallas Cowboys. With him, Grantham brings a totally new scheme to the Bulldogs , the 3-4 defense. Tack on new linebackers coach warren Belin from Vanderbilt, as well as new defensive backs coach Scott Lakotos from Connecticut, and you have only defensive line coach Rodney Garner as a hold-over from the previous staff. Players will compete for new jobs within the new defense. A lot of teaching and a lot of learning will be going on this spring. On the other side of the ball there is a three player competition for the starting quarterback job, two running backs who aspire to be Georgia's first tandem to rush for 1,000 yards each, and a somewhat thin but nevertheless talented wide receive corps. The Dawgs do return an experienced and deep offensive line group, and the aforementioned receivers do feature legitimate Heisman Trophy candidate A.J. Green. Expectations, as always, will run high with regard to the Bulldogs. It just begins in March. Such is the madness.