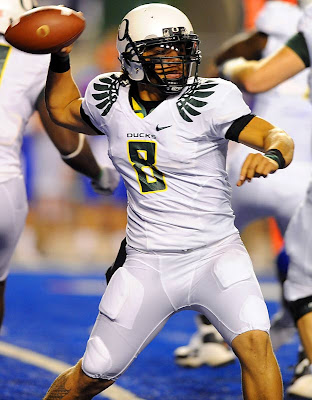 How does that saying go: If it looks like a duck, waddles like a duck, and quacks like a duck, then it must be a duck? Man oh man, the hits just keep on coming for Chip Kelly's Oregon Ducks football program. Yesterday, Kelly suspended quarterback Jeremiah Masoli for the entire 2010 season. Wow, that is some heavy punishment. Masoli pleaded guilty to second degree burglary of the on-campus theft of two laptops and a guitar. (I suppose he could use to guitar to play the blues after all this!). Running back LaMichael James was also suspended for the Ducks season opener due to an altercation with his former girlfriend. (No small wonder she's his 'former' girlfriend)!). Placekicker Rob Beard will also sit out the September opener stemming from a street fight incident. The double whammy for Beard is that it appears he got his butt kicked in the street fight as well. (Remember to always win the fight if you're going to be suspended!). Don't forget, these are the same Oregon Ducks who saw running back LeGarrette Brooks serve a season long suspension last year after sucker-punching a Boise State player in the aftermath of their season opener. The Ducks are creating quite an image for themselves and their University as the new thugs of college football. If they recruit the cheerleaders in on their transgressions, they could become the modern day Bonnie and Clyde!