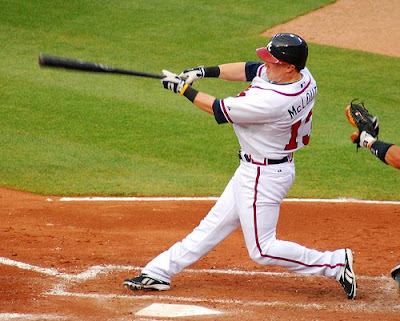 This spring, Nate McLouth is hitting a frigid .071, as a result of reaching base safely a measly three times out of 42 attempts. It is now so bad that the Braves have sent him to minor league games so he can get more at bats. This pre-season performance comes on the heels of a season ending 12 for 73 slump last year. Not a good run for a guy who has never even scratched the surface of being the player Atlanta expected him to be when they acquired him from the Pirates.
Braves skipper Bobby Cox is known to give his veteran players a lot of playing time to work through slumps, but in the case of McLouth, I hope Cox has him on a short leash. Newly acquired Melky Cabrera is waiting in the wings to play center field and bat in the lead-off spot.
After all, the season begins in eight days.
Posted by Sports Dawg at 8:38 AM