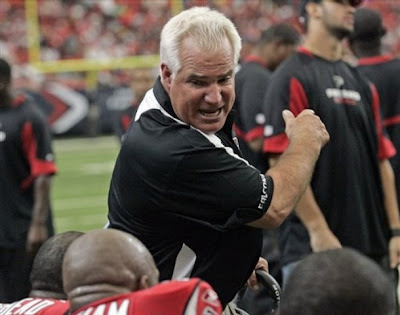 Mike Smith is a no frills kind of guy. Strictly business. Punch the clock, do your job. Work hard, but have fun playing the game. Keep it simple, 'cause it ain't rocket science. When everyone tried to build up the Falcons' game with Green Bay on the infamous "Frozen Tundra", Smith was quick to point out that it was 100 yards long and 53.5 yards wide just like every other football field. Don't make a big deal out of something that's no big deal. Just play hard, have fun, and win. And yes , Atlanta defeated the 'Favreless Pack' on that historic field! "Smitty" is a hands-on football coach. That's what you sometimes get from a life long assistant coach (if you're lucky). He's not an observer at games nor practice. He is definitely a participant, and the players have bought in to his blue collar approach. Falcon followers are no longer talking about dog fighting and prison terms, they're talking about playoff possibilities and the solid football being played by this edition of their Atlanta Falcons. There's definitely a new Sheriff in town, and he's got both barrels blazing. He's doing the leading, so you better follow or get the heck out of the way!