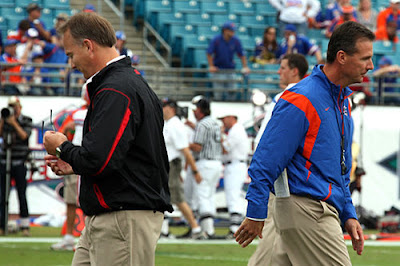 Texas Tech competed against Texas in a big game. And won. Georgia Tech competed against Florida State in a big game. And won. Georgia DID NOT compete against Florida in a big game. And lost. If I could ask Coach Mark Richt one question, it would be to get his answer as to why Georgia has games when they just fail to show up and compete. We did not show up and compete in Tennessee a year ago and were thrashed. We did not show up and compete against Alabama this year in Athens and were thrashed. And now we don't show up and compete against Florida in Jacksonville and we get thrashed. It was billed as perhaps the biggest Georgia-Florida game ever. So many implications. SEC East, SEC, National Championship. And we are not there in the end with a chance to win and continue towards those lofty standards. Is Georgia overrated or under-achieving? I would venture to speculate a lot of both. It's certainly not a talent issue, because we have recruited well and we are loaded with kids who can flat out play. I think it is a passion issue. I think we lack kids who are willing to sell-out for the ultimate prize. I think we are not a team who fights through and overcomes adversity very well. I think we need one of those recruiting classes that is not ranked in the Top 10 classes, but is loaded with players who want to knock their opponent into next week, fight to the end, and leave the message that playing Georgia is never going to be a fun experience. We do not seem to have that type of passionate player in Athens. Yea, I'm talking about a David Pollack caliber player. Ultimate desire to be the best. Ultimate team player. Unmistakable killer instinct. That's what is missing with our Georgia Bulldogs. Until we have teams instilled with those intangibles, we'll continue to "not show up" for the big games. We will continue to not be there in the end with at least a chance to win. And we will continue to under-achieve.