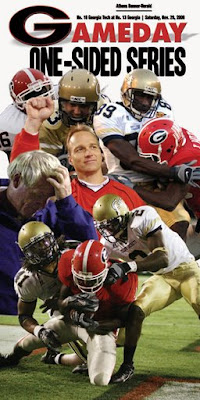 It's Gameday in the 'Classic City'. Georgia versus Georgia Tech. And it's a very wet Gameday. It's often said in football that bad weather conditions favor the underdog. Only trouble with that is, this game is rated a virtual toss-up. I would think the rainy day would tend to help the Jackets because of their ground attack, except for the fact that handling the triple option with a slippery football can't be conducive to extended success. There are just too many tosses to trailing backs in that option set. Not to mention the fact that Tech is prone to putting it on the ground anyway. But from a Georgia offensive perspective, quarterback Matthew Stafford and his corp of receivers can't be overjoyed with a forecast of steady rain. With all of that said, it is entirely possible that the weather will do what the defenses are so concerned about being able to do: Stop the opposing offense. Now it becomes a game of turnovers; who will commit the least, and who will be able to take advantage of them the most. Special teams will come into play in a significant way, because field position will be especially important. But isn't it important in every game? Who knows, a punter and/or a kicker might turn out to the the hero of the game. Or the 'goat'. But the bottom line is that it's still football, and it's raining on both sides of the line of scrimmage. May the team wearing the 'Red and Black' reign victorious!