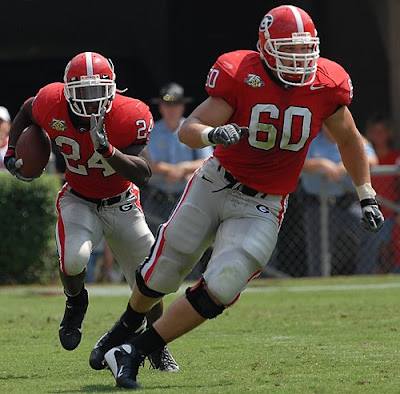 Georgia's offensive line is like a Timex watch. It takes a licking, but keeps on ticking. At the beginning of this season, Georgia had a total of 13 scholarship offensive linemen. As they prepare for this weeks game against Auburn, that number has dwindled to 7. And talk about a youth movement, that group starts 3 freshmen and 2 sophomores. Saturday's quintet will be the Bulldogs fifth different alignment this season. And they know all about cross training, as all of them have played at least two different line positions. Even with all this going on, Georgia still has managed to lead the SEC in total offense. That's really mind boggling when you stop to think that offensively everything starts up front. And with very little, if any, continuity that fact is even harder to believe. That is a credit to the "remaining" guys' toughness, Coach Stacy Searles ability to restructure and adapt, and the outright talent of Georgia's offensive skill position players. Incidentally, Freshman center Ben Jones was just named SEC offensive lineman of the week in recognition of his efforts in the Dawgs victory over Kentucky. It is certainly no startling revelation that Coach Richt and staff must make signing offensive lineman a high priority each recruiting season so that, at some point, wholesale rebuilding will not be a necessity. It goes without saying that it will be much better to 'reload' as opposed to 'rebuild'. But we're a long way from 'reloading', so we just have to keep 'revamping' in order to get through the remainder of this season successfully.