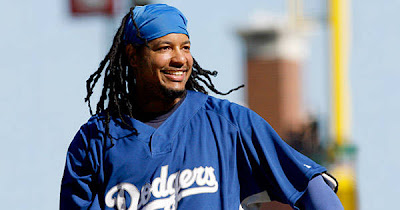 The Los Angeles Dodges made the initial offer in the Manny Ramirez sweepstakes with a reported deal of two years at $50 million, or three years at $75 million. Either would be the second highest average annual salary in baseball behind the Yankees Alex Rodriquez. Ramirez, who is 36 years old, and his agent Scott Boras, are said to be seeking a longer term deal that would perhaps carry Manny into his early 40's. Don't expect this to be settled anytime soon. Manny wants to test the free agent waters and see just what figure other owners place on his value, or more specifically what other owners are willing to pay for his services. I think I would have to put a "disenchanted clause" in his contract if I was an owner. It's pretty hard for Manny to stay content in one place over a long haul, and I sure would hate to be paying him monster bucks when he decided to quit running out ground balls again (right Boston?). But I guess that too is just "Manny being Manny", as they say (right Manny?).