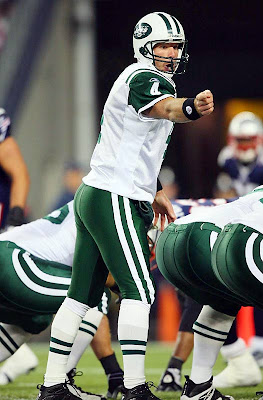 Brett Favre led his New York Jets to a 34-31 overtime win against the New England Patriots Thursday night in Foxboro. The victory improved the Jets record to 7-3 on the season, and propelled them to first place in the AFC Eastern division for the first time since November of 2001. Favre was 26 of 33 for 258 yards. He threw for two touchdowns, with a very surprising zero interceptions.