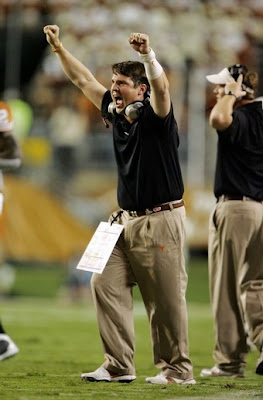 The title "Head Coach-In-Waiting" is gaining popularity around the college football ranks. Florida State has one, as does Kentucky ( now why would anyone hang around and wait for the Kentucky job to come open?). And now the University of Texas has one. Will Muschamp, arguably the most sought after assistant coach in Division 1 football, will apparently continue to be the Longhorn's defensive coordinator until Head Coach Mack Brown decides to ride off into the Texas sunset. Although Muschamp has only been on the scene one year, Texas has cloned him their chosen one for the future. He also gets a raise which doubles his current salary to $900,000 per year. Muschamp feels he isn't ready to be a head coach yet, and he's content to learn all he can from Brown while he's there. He also believes being the head football coach at the University of Texas is the ultimate job for him. Mack Brown is 57 years old, which is still considered young in the coaching profession. Texas wants him around a lot longer, and he wants to coach a lot longer. He has eight years remaining on his current contract. The Longhorns feel this announcement makes that transition day so much less traumatic for its program. They will not have to deal with such issues as speculation, rumors, coaching searches, nor recruiting problems. Since they feel Muschamp is their man, the speculation that he was receiving interest from Tennessee, Clemson and Washington might have stepped up this announcement. My only question is, how long is an assistant willing to remain an assistant when he realizes 'his time' might already be there? If Mack Brown finishes out his contract with Texas, will Muschamp remain content as an assistant for the next eight years? One would expect that a lot of really good jobs at some top universities will open up between now and the next eight years. Even now, being named the head coach of the Tennessee Volunteers would not be that much below Texas. Clemson would not be paying "chump change" either. And oh yea, what if Auburn is really fed up with Tommy Tubberville this time, there aren't many coaches who would turn down that job on the Plains and a chance to compete in the SEC. But on the other hand, I'm sure Will Muschamp knows all of this, having played at Georgia and coached at Auburn. Perhaps this "tie-up" would be easier to understand if he wasn't so sought after, or even if there was a specific date out there that he would assume control. Good luck, Will, in staying the course!