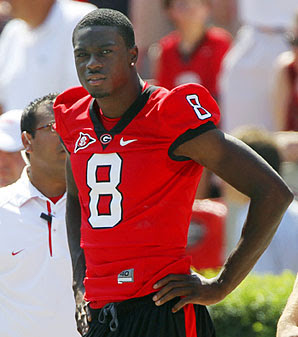 A.J Green spoke today about selling his jersey. Basically, reading between the lines, he said he knew it was wrong, he didn't think he would get caught, and he needed the $1,000 for spring break. He obviously didn't think about his team of Georgia Bulldogs in the process either. I understand Green is a really good kid, but I'm tired of college athletes doing things the wrong way. Especially when they hurt their team's chances of winning in the process. I'm certainly not implying Georgia's record would be better if Green had been in the lineup, but it sure as heck wouldn't be worse. As far as I'm concerned, he owes it to his university to return to Georgia next year and play a full season, but we all know that isn't going to happen. One thing that puzzles me though is if he needed the money for spring break, that means he spent it during spring break. But he says he gave $1,000 to charity as retribution for his transgression. So where did the "second" $1,000 come from? Hummm.....