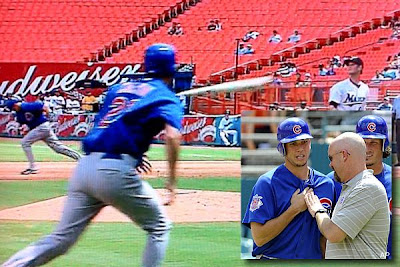 Just from faithfully watching the Braves play all season, I've thought several times that I couldn't remember a season where there were so many splintered bats flying all over the place. Yesterday, one of Major League Baseball's greatest fears was realized when Chicago Cubs rookie right fielder Tyler Colvin was punctured in the chest with part of a broken bat. The wooden projectile's wound was allowing air into his chest well. Players have been hit by flying bat particles this season, but this is the first time a player has actually been stabbed as Colvin was. He was hospitalized, but only required stitches.
Posted by Sports Dawg at 8:50 AM