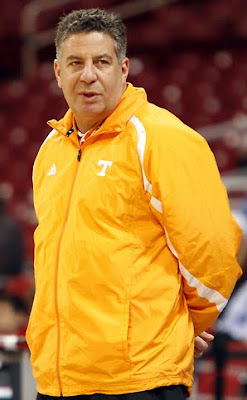 Bruce Pearl lied to the NCAA. That's like one of the Corleones lying to the Godfather. He tearfully admitted as much. But he won't lose his life or a limb for his transgressions to the governing body as he would have to the head of a crime family. Come to think of it, he is the head of a crime family: The University of Tennessee. So what punishment hath UT bequest upon Mr. Pearl? It seems he will have his salary docked $1.5 million over five years. In perspective, Pearl made $1.9 million in 2009-10. He is guaranteed a $200,000 per year raise thru the 2014-2015 season, and will receive a $500,000 longevity bonus after the 2012-2013 season. So basically he forfeits his annual raises and his longevity bonus. No sanctions, no suspension for Pearl? His only restriction is that he cannot recruit off-campus for one year. Whether this is regarded as just a slap on the wrist by the university is a matter of opinion. I tend to think he came out pretty good. I'm sure coaches have been dismissed for a heck of a lot less before. The thing I am interested in seeing is how the NCAA comes down on Tennessee. Pearl is in charge of the development of a lot of young men, yet he admits to being a liar to protect his program. What kind of message is that for the lead Vol to be sending out? I hope the NCAA suspends Pearl with his time to a greater degree than the university did with regards to his money. They take away playing time from the athletes, why not take away coaching time from the coaches?