Pete Rose: Put Him in the Hall of Fame 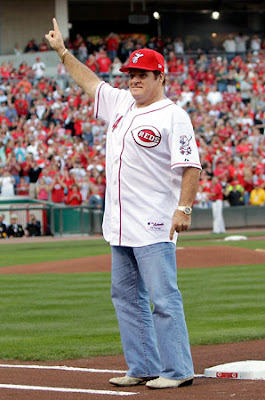 The Cincinnati Reds honored Pete Rose Saturday on the 25th anniversary of his record setting hit number 4,192. Rose, who is 69, made a rare on-field appearance and stood at first base waving to a cheering crowd. The Reds had not previously been allowed to hold any on-field ceremonies to honor Rose or his achievements in the game. The lifetime ban from baseball that he agreed to for gambling on the game leaves his involvement to nothing more than the ordinary fan. I think it's time for Pete Rose to be pardoned and inducted into the Hall of Fame. He's paid a stiff price for a high crime, but the "Hits King" belongs in the Hall. I've never been a rider on the Rose bandwagon, but we'll never see anyone break that record for many years, if ever. He needs to be elected for that alone, but also for the way he played the game. No player ever loved playing baseball more than Rose, and not many ever played it better. Certainly no one with more hustle and enthusiasm. Go ahead and put the guy in the Hall of Fame. He deserves it because he was one of the best baseball players ever. Besides, there's probably no one in there now who doesn't have a few skeletons in their closets as well.