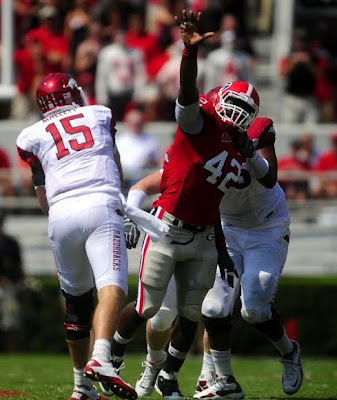 Zero and two in the Southeastern Conference. Zero and two will make 'Bulldog Red' turn blue. And where do we go from here? Mediocrity has a tendency to sour with age if not escaped from. I hope Georgia can perform a Houdini act and escape from this funk of being, at best, mediocre.


Perhaps South Carolina and Arkansas are not your Granddaddy's South Carolina and Arkansas. They legitimately might be much better than that. At least the Bulldogs have already faced the best running back (SC'c Lattimore) and quarterback (UA's Mallett) that they will see during the remainder of this schedule. But have those two universities already faced the weakest offensive line they will see the rest of the year? The most befuddled defense?


I thought I would know much more about our Georgia team after the Arkansas game. I thought wrong. I can't ascertain as to whether or not we are just a little off from being pretty good, or if there is something really wrong in Athens. Think about it. We were a crucial fumble away in Columbia, and a third down conversion away in Athens yesterday. Reverse those two plays and Georgia could be 3-0. But they are not. There are no "do-overs" in college football (unless there is a penalty,right Clemson?). Georgia is 1-2, and headed for an evening engagement in Starkville, Ms. with 'State' college and none of us know how Georgia will play that night. I don't have a clue.


I have a T-shirt that reads "We Are Georgia", but I 'm beginning to think that shirt has lost its identity. I sure hope Houdini shows up fast. Time feels like it's running out already on this season and on this team.
Posted by Sports Dawg at 10:37 AM