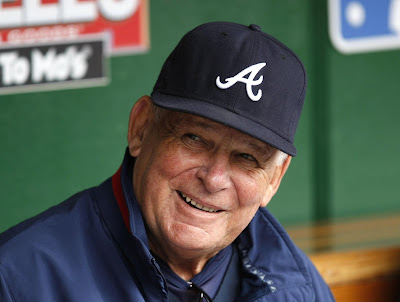 This is a great Bobby Cox story, whether you've heard it before or not: Jeff Francoeur and Bobby were both thrown out of a game in San Diego at the same time. When they arrived in the clubhouse, Francoeur acknowledged that this was his first ejection, and quite frankly he didn't know what to do. Bobby suggested he have a couple of beers, relax in a cold tub, and get ready to write the league a $500 check. Or Cox then suggested Jeff could do what he does " I write 'em a $10,000 check and tell 'em to call me when that runs out." Francoeur said it was the hardest he ever laughed. Cox set the Major League record for most ejections in 2007, and on September 17, 2010, he was ejected for the 158th time in his career. Most of those tosses were made when he was either standing up for one of his players, or protecting one of them from being thrown out of the game. Thanks again, Bobby!