Fred McGriff: We Need You Now... 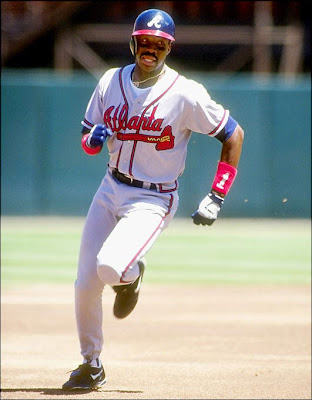 Was Fred McGriff the last player we acquired after the season started who was 'lights out' for us? Fred came to town and was everything and more we hoped he would be. He helped lead the Braves to the post-season for several years. Atlanta acquired McGriff from San Diego in July 1993, and he promptly hit a big home run in his first game with the Braves. His offensive tear continued the rest of the season, that being one of the main reasons Atlanta secured the division title that year. He remained productive for the club until 1997 when he was selected in the expansion draft by Tampa Bay. When the Braves acquired Derrek Lee from the Cubs this year for the stretch run, I was hoping Lee would be the type first baseman that McGriff was. We all know that hasn't happened yet. The acquisition of Alex Gonzalez at shortstop has not been an overwhelming move up to this point, and Rick Ankiel is not our answer in center field. By the way, Atlanta lost their precarious lead over the Phillies last night. Unless someone steps up their game like Fred McGriff did, the Wild Card may be fleeting as well.