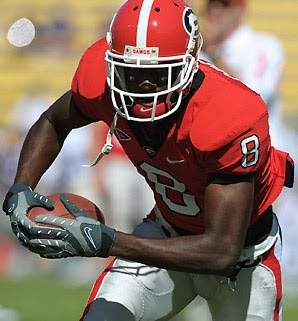 I don't even know where to go with this post. On the one hand, I feel really bad for A.J. Green. I almost feel that he should have turned pro this year instead of next, except for the NFL's three year rule. For his sake. The four game suspension that the NCAA handed down to Georgia's star receiver today for selling a game jersey is pretty stiff. Stiff as in one third of a season; a season that will be Green's last in Bulldog red. He's far too good to pass up a lucrative pro contract this next time around. When I consider how much money Georgia has made off of royalties from the sell of Green's number "8" jersey, I just wonder what's wrong with this picture. Then I switch gears and consider the fact that he was paid $1,000.00 for his jersey. He had to realize this was a red flag waving like crazy, and that it just wasn't right. That much dough for one game jersey? Heck, I would sell a huge part of my entire wardrobe for $1,000.00. But at the same time I'm a long way removed from 19 years old, thus my thought processes are hopefully much different (and improved!). Nevertheless, the only benefactors in this scenario are South Carolina, Arkansas, and Mississippi State, Georgia's next three opponents. Green's actions, no matter if innocently done or not, have hurt himself, his team, and his university. These guys have classes regarding this type of temptation. Will they ever learn?
Posted by Sports Dawg at 6:11 PM