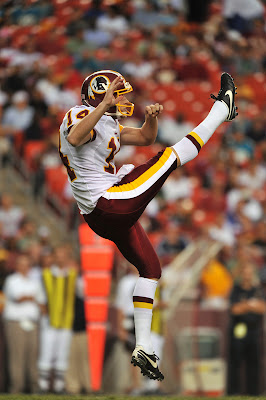 It's now official, The Washington Redskins have cut Derrick Frost and named Durant Brooks as their punter for 2008 (and probably a lot of years after that!). The 'Skins made Brooks their 6th round selection in this year's draft, but he certainly was not promised the job just because of that (just ask his Mom! O.K. LuAnne, you can relax a little now.). Durant went out and earned the job in a very close competition. He showed a tremendous amount of poise for a rookie, being able to stay consistently good, even if not spectacular. I think you will see him settle into this role as a starting NFL punter, and just get better as the season progresses. He was so adept at Georgia Tech at being able to turn the field position game around for his team with his booming kicks. I think Washington will soon enjoy that same benefit from the leg of Brooks. It isn't always that you have a young punter who is the total package that Durant Brooks is. He has the strong leg capable of booming those 60 yarders, he has fantastic hang time that results in great coverage, and he has the touch to drop those pouch kicks inside the red zone. Congratulations, Durant! You've worked hard and you deserve to be an NFL punter. Here's to a great rookie season!