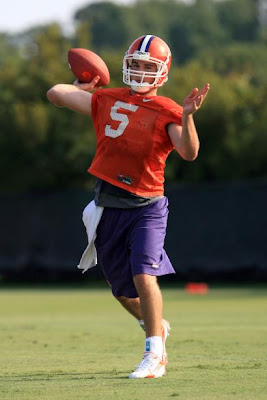 Jon Richt is a freshman quarterback at Clemson University. Not really that big of a deal except for the fact that his father, Mark, is the head coach at Georgia. So orange has replaced red as Jon's primary school color. In case you were wondering, Georgia and Clemson don't play each other again until 2013. Assuming Jon redshirts this year, he and his dad will escape facing each other by one year. Here's hoping Jon gets a little bit more collegiate playing time than his dad got! Here's also hoping he turns out to be the man his dad is!