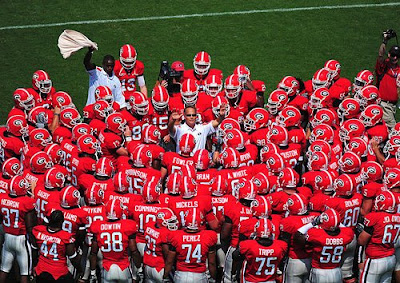 I hope you didn't expect Georgia to hang 50+ on Georgia Southern this afternoon in Sanford Stadium. I wanted us to win big because of the national picture, but realistically I knew we wouldn't just blow the Eagles out. Historically, we just haven't been that kind of team. It's not a Marl Richt trait, we've been that way since through the Vince Dooley years. It seems we tend to "play down" to our competition's level, and I mean no disrespect to Georgia Southern here. But we did have such a talent, as well as depth, advantage today that the score really should have been around 56-10, rather than the actual 45-21. We just did not look like an over-powering, preseason number 1 football team. I know, it was the first game, but I just walked out of my den and Alabama isn't playing like it's a first game (first half vs Clemson). Georgia must be the kind of team that gets better each week it plays. If they can be that kind of team, they can show themselves worthy of their lofty ranking. If not, those "Ford Tough" Georgia Saturday's might turn out to be "Root Canal Tough".