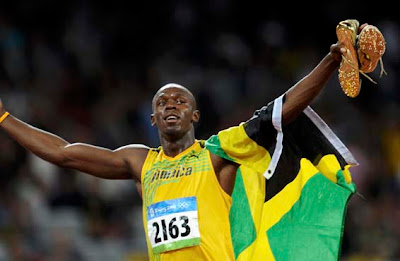 Usain Bolt has no competition at the Beijing Olympics. Except for maybe the timing devices. He sprints with a smoothness and ease and gracefulness that not every sprinter possesses. He has already won the glamour event of Track and Field, the men's 100 meter dash. He set a new world record in the process, even though the did not go 'all out' the entire 100 meters. I was thinking: how fast could you have gone in the final? I also wondered why anyone would 'coast' in any Olympic final? That's the insane part. The Olympics only come around every four years, so put every ounce you have into them. You can celebrate after its over. Haven't you trained your fanny off to reach the pinnacle of your sport? What better place to showcase that talent than in an Olympic setting. Don't waste this opportunity. Sure you won easily, but your time wasn't the best it could have been, and you don't get to do it over. You might not even be in the next Games four years from now. You will of course be in the 200 meter final. You will be the favorite again. You will have a shot at Michael Johnson's 19.32 record set 12 years ago. I'll venture to say you won't get that one if you ease up at the end. And if you do cheat everyone, including yourself, by not busting your tail, I hope you miss the record as well as the Gold.