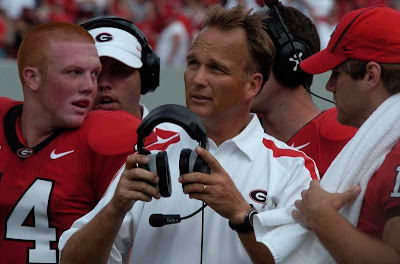 Mark Richt was named as one of the Top 25 college football coaches in the country. Georgia's Richt, named in the top five, was joined by five other SEC coaches on the list. Florida's Urban Myer was slotted in the number one position. The other four were Auburn's Tommy Tubberfield at number eight, Alabama's Nick Saban at number nine, South Carolina's Steve Spurrier at the eleventh spot, and Les Miles of LSU at number twelve. Paul Johnson, the new head man at Georgia Tech, occupies the seventeenth position. I would have thought Butch Davis at North Carolina would have made that list, but I'm not surprised that the Bowdens, Bobby and Tommy, were omitted. Phillip Fulmer wasn't on the list and should not have been, but Sylvester Croome at Mississippi State just might climb into that mix if he continues to build on the good job he's doing there. Mark Richt's record at UGA of 72-19 is fourth best in the country in winning percentage among active coaches. Quite impressively, his teams are 25-4 when playing in an opponents home stadium. That amazing when you consider that includes playing at LSU, at Alabama, at Tennessee, at Auburn, at South Carolina and others. He is one of only nine head coaches in Division 1-A to record 70 or more wins in his first seven seasons. He is also one of only five SEC head coaches to record four straight 10 win seasons. And at the age of 48, Mark Richt is just getting warmed up!