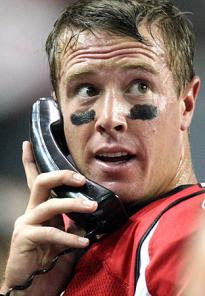 The Atlanta Falcons have named rookie quarterback Matt Ryan as their starting QB for the season opening game against the Detroit Lions. Ryan was signed to a six year $72 million contract after being the third selection in this year's NFL draft out of Boston College. I guess the Falcons want Ryan to start earning that salary immediately. Houston's David Carr was the last rookie to start his team's opener back in 2002.