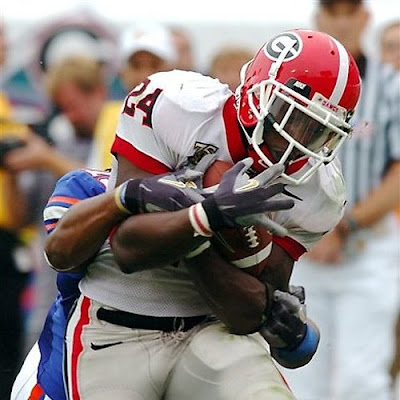 Georgia coach Mark Richt has confirmed that Knowshon Moreno has been working with the punt return team in practice. However there have been no definite reports that he will actually see game action returning punts. Nevertheless, he has been fielding punts and taking reps with that specialty unit. I'm betting here that we certainly don't see him in this role during the first two games, and the practice field might be as far as this 'experiment' goes. Obviously, no player has stepped up and outright taken over this job. The other candidates are Asher Allen, Logan Gray, and Carlton Thomas. This possibly could turn into a rotation group until someone jumps out of the group and takes over. The downside to Moreno as a return man is very simply the risk of injury. The upside is of course giving as many touches as possible to your most explosive offensive player. We all know how tremendous he can be in the open field, so the temptation must be very enticing for the coaching staff. As I've already stated, don't look for him before Carolina, but if he makes an appearance "back there" then, look for him to appear in all the other games at least once. That is, if the game is close and he could be the catalyst to break it open. On the other hand, if the numbers two and three tailbacks aren't performing well, Knowshon might have all the workload he needs out of the backfield. I'm glad it isn't my decision to make, but then I suppose that's one reason they pay college coaches all those big bucks.