Darryl Gamble : Player of the Game 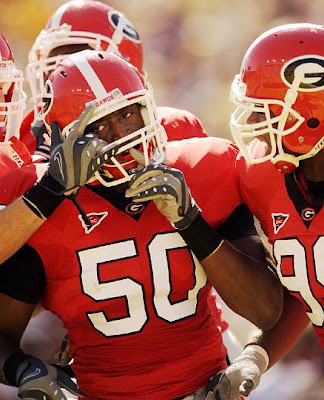 Darryl Gamble got the scoring started for Georgia in their 52-38 win over LSU on Saturday by intercepting the ball on the first play from scrimmage and returning it 40 yards for a touchdown. Darryl Gamble ended Georgia's scoring with a 53 yard interception return late in the game to tie an NCAA touchdown interception record for linebackers. Both picks came off Tiger quarterback Jarrett Lee. He also had 13 tackles, one of which was for a loss. His 93 yards of "offense" translated into the 14 point margin of victory for the Bulldogs. The red-shirt sophomore middle linebacker was playing in place of starter Dannell Ellerbe, who did not make the trip to Baton Rouge due to a knee injury. Gamble's initial interception was a tremendous lift for the Dawgs, enabling them to get an early lead against a tough opponent in a tremendously hostile environment. Although LSU answered that score on their very next possession to tie the game, Georgia also responded immediately with a second score and never trailed in the game. Darryl Gamble set the tone, and his Bulldogs just kept playing that tune!