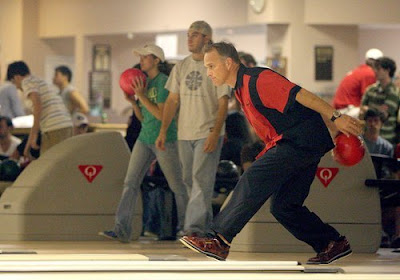 Th Coach Richt Challenge is a weekly Thursday night bowling league for University of Georgia students. The league was the founded by Coach Richt as an alcohol free alternative to the traditional Thursday night out for UGA's students. 48 Bulldog lettermen mix it up with 80 'regular' college kids in an in-season bowling league. The league consists of 32 four man teams who begin competing at 10:30 every Thursday night and wrap it up in the 12:30 neighborhood. Richt's team is composed of Matthew Stafford, Knowshon Moreno, and baseballer Adam Fuller. They are the "Untouchables"! The league is sponsored by the Athletic Assoaciation and has a waiting list of 150 students. It's hard to imagine a major college head football coach who would MAKE the time during football season to devote to a student body the way Mark Richt is doing with his involvement and participation in this bowling league. He not only talks a righteous talk, but he backs it up with his actions as well. "Super Boca", the nickname stitched on his bowling shirt is o.k. with me. Mark Richt is pretty super all by himself!