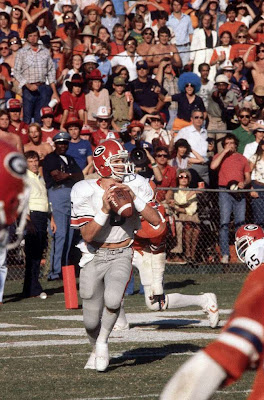 In the photo above, Georgia's Buck Belue begins the most famous play in Georgia vs Florida history. Speaking of history, Georgia leads this series 46-37-2. Florida likes to brag about their domination in the 1990s but consider this: From 1971 through 1989, Georgia won 15 out of the 19 annual contests played. You won't hear mention of this from any Florida fans, and many young Georgia fans are unaware of our past and overall dominance. Also, consider this bit of factual information: The University of Florida never won an SEC football title until 1991. Yes, you read correctly, 1991! And the University of Georgia kept them away from the title many times by defeating them in Jacksonville. Incidentally, Georgia had won 10 SEC gridiron titles
before 1991 (who's yo Daddy now!). So to put all these numbers in proper perspective, the Gators would have to win the next 9 battles to just pull even in the war. You and I both know that isn't about to happen. In fact, Opinion On Sports predicts that Florida will NEVER tie or lead this series overall. This post has been a Dragnet special, 'cause like Joe Friday would say, "Just the facts, Ma'am"!