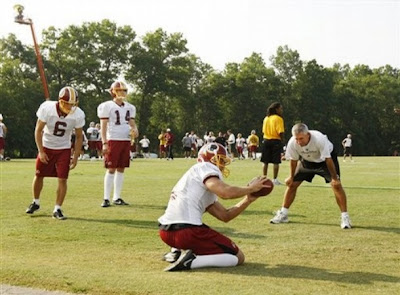 Danny Smith is the inept, egotistical special teams coach of the Washington Redskins. Since you haven't heard much about the 'Skins special team play, that lets you know he hasn't or isn't in the running for any assistant coach of the year honors. His specialty is spewing profanity at a high volume. He seems to be one of those old, washed-up, frustrated jocks trying to relive his playing days by staying connected to the game through the profession of coaching. He perhaps knows something about the game of football simply because he's been around it for so long. But it's evident he knows absolutely nothing about relating to his players, and even less about understanding how to motivate them. His general manager even says he's an a__hole. He persuaded the Redskins to draft Durant Brooks in this past years NFL draft, and rightfully so. Brooks is said to be one of the most talented punters to come out of college into the Pros in years. That's where the kudos for Mr. Smith begin and end. He never tried to help develop Durant as an NFL player. All he did was bash him, mess with his psych, and destroy his confidence. And you would think he wanted to see this rookie succeed. Smith succeeded in turning practically an entire NFL city against Brooks. I never read so many negative articles about a special teams player before. Anywhere. One would think Durant Brooks was responsible for every Washington loss. He most definitely was not. Brooks is on injured reserve now with a torn muscle, and the Redskins will most likely release him when he comes off. I know Durant Brooks, as well as the family he comes from. That release will be Washington's loss, because Brooks will punt again in the NFL. And he will punt very well for a lot of years. And Danny Smith will get what he deserves one day, his own release. Get Smith out of coaching before he has the opportunity to try to destroy other talented athletes. Do the right thing Jim Zorn: can his rear end now!