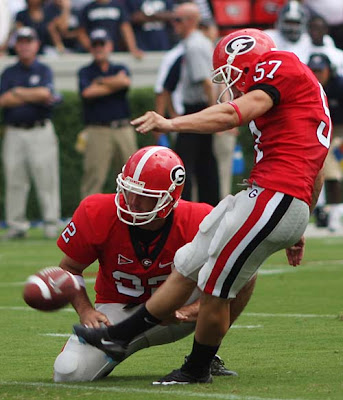 Georgia has been heavily scrutinized for its tendency to "directional kick" most of its kick-offs last year and a lot this year. The Bulldogs' kick coverage has been atrocious, resulting in great field position for the opposition. When kicker Blair Walsh was asked whether he preferred to boom it through the end zone or try to kick it short of the goal toward one of the 'coffin corners', he replied: "I do what I'm told". Translated, that means "I want to kick the crap out of it every time, but my special teams coach is such a bone-head that he won't let me". I don't think I could have expressed that any better myself!