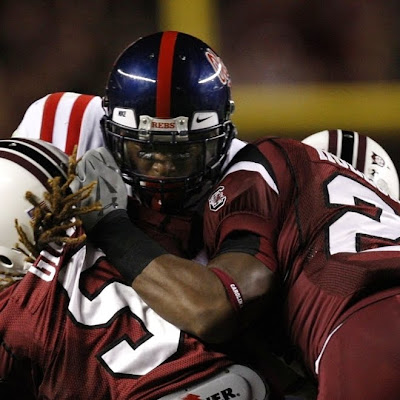 South Carolina defeated Ole Miss Thursday night 16-10 in a crucial SEC game for both teams. The game might have been played on what I refer to as "ACC Night", meaning a Thursday, but the defensive struggle was nothing like the offensive frenzies of that weaker conference. Ole Miss came into the tilt ranked number 4 nationally, but the Rebels were, and are, nowhere near a number 4 team. To be perfectly honest, Ole Miss is not even a Top 20 team. So simmer down Gamecocks, you played a more than respectable game on defense, but you really weren't up against much. And it's a good thing for South Carolina, because their offense wasn't up to very much either. Ole Miss will not win the SEC West. Heck, they won't even finish in the top 3 in the West. Neither will South Carolina win the East, but they could have a say in who does. Because if you have to play in Columbia after the sun goes down, you just might get bushwhacked by a pretty good SEC defense.