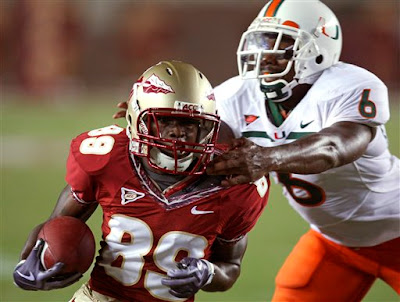 After Miami defeated Florida State Monday night 38-34, all the ACC purists said this was just what the conference needed. Their two showcase teams fighting it out down to the wire. They feel the ACC needs for the 'Canes and the 'Noles to be back in prominence. You can't very well have a car show without that vintage Ford and Chevy, can you? And hey, who needs that SEC defense anyway? Just run that score up like an American League baseball shootout. That's ACC football at its finest, and the fans and media love it. I'll admit, it was a great football game. Up and down, back and forth, big plays and exciting plays. The ACC does need these two teams to contend again, and they can contend in that league. They just aren't ready for the big time yet. They aren't BCS contenders yet. But hang in there boys. You're in a weak-sister league where only a couple of teams play hard nosed defense. That gets you half-way there by itself. Anyway, thanks for a great clash, even though you're not great teams. And one more thing: Bobby, you're another victory behind that other old guy at Penn State.