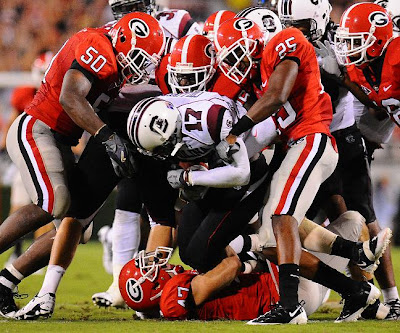 Is there such a thing as an "ugly win"? In the SEC where every win is crucial, I vote for the old saying that "a win is a win is a win". And in Athens, Georgia this year, wins are to be cherished, because there is a very strong possibility that there will not be as many of them as we would desire. Georgia outlasted the South Carolina Gamecocks 41-37 Saturday night in a long, drawn-out gridiron affair. Big plays by both teams were the order of the night. As much as I hate to admit it, this game was a lot like one of those ACC tilts I have been bashing that conference about lately. Soft defensive play and big scoring plays. That's an ACC trademark, and the Dawgs and the 'Cocks borrowed a script out of their portfolio. It does indeed hurt to write that. And it hurts even more to acknowledge that a soft defense is continuing to be a way of life "Between the Hedges". The 'bend-but-don't-break' style of defense once employed so successfully by the great Erk Russell just doesn't cut it in today's football. Offensive teams now will take the six to eight yards you give them and stuff it right down your throat with ten to twelve play scoring drives. For one, Erk didn't have the athletes Georgia has now. He had guys with great heart and desire, even though they did not possess exceptional talent. Today, the bulldogs have talent galore, and if they don't, the so-called recruiting experts better re-evaluate our last eight classes. They were all ranked in the top 5 or 10 nationally. The Bulldogs have great talent, but they are not even close to being a great team. I know the difference, but I wonder why. The word I have deferred to for weeks now is 'philosophy'. I suppose it is our coaching 'philosophy' that allows us to abandon the run offensively when it is working so well for us. "Philosophy' that allows us to be so soft defensively. "Philosophy" that makes us so inconsistent on special teams. I am glad we won. I only wish we had won in such a way as to give me more optimism for the rest of the season. This 2009 edition of the Georgia Bulldogs does have heart and resiliency. But they should be reloading instead of rebuilding. And I don't understand why.