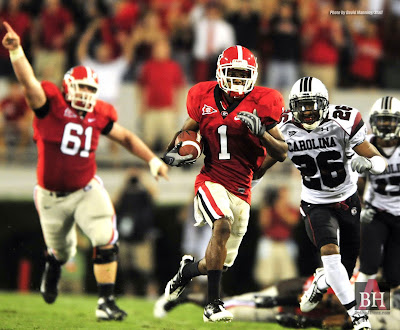 Freshman Branden Smith (#1) might not be the fastest Bulldog ever, but he has that exceptional, game-breaking speed we haven't see in Athens in a long time. He is a threat to the opposition literally every time he touches the football. Sophomore A.J. Green (#8) just might be the best and most talented receiver to ever wear the Red & Black. He is a "Play-Maker Supreme", capable of changing the games' momentum all by himself. A quarterback doesn't have to throw it to him, just throw it in his vicinity. He will take care of the rest. Georgia must get the ball into the hands of these two guys as many times and in as many ways as they can. All Smith needs is a crease and he's gone; Green doesn't even need the crease, he'll make his own. In a season where most of the Bulldog Nation still isn't sure of what these 2009 Dawgs are all about, enjoy these two Pups all you can, while you can. They are as you say, "Worth the price of admission". At this level and the next. 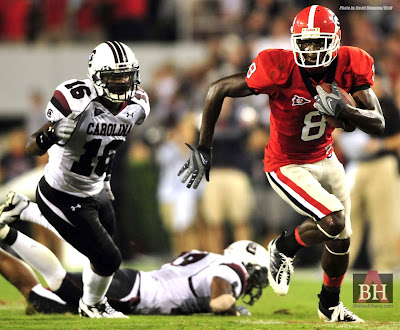