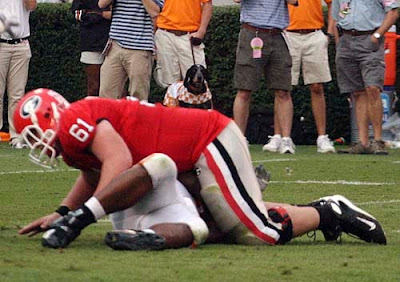 Before Georgia tailback Caleb King ran for two fourth quarter touchdowns against Auburn, center Ben Jones told him before each run: "Follow me". King listened, obeyed, and scored. Tomorrow against the Kentucky Wildcats, Jones will make his 21st consecutive start on the Bulldawgs offensive line. And as coach Mark Richt says,"He's like a pig in slop out there. He loves it." Lead on "Sixty-One".