Bobby Bowden: A Not So Happy 80th Birthday 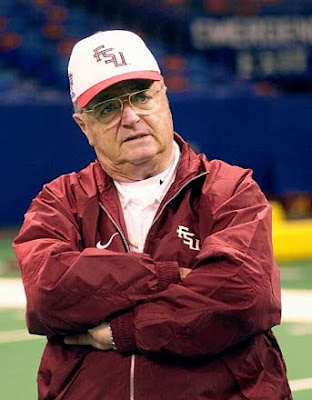 Bobby Bowden turned 80 yesterday, less than 24 hours after his Seminoles lost a key ACC encounter with Clemson University. Florida State now stands at 4-5 on the season, two wins shy of becoming bowl eligible. If FSU fails in their attempt to play in a bowl, it will end a nations-best streak that dates back to 1982. That means the 'Noles must win two of their remaining three games, one of which is with top ranked Florida in the "Swamp" to close out the regular season. They will also travel to Wake Forest this Saturday, and close out the home part of their schedule with Maryland in Tallahassee on November 21st. To top it all off, he might have to accomplish this feat without his starting quarterback, Christian Ponder, who injured his shoulder in the Clemson encounter. If his team fails to make it to a bowl during the holidays, I think Bowden should go ahead and relinquish the reigns of the Seminole program to their coach-in-waiting, Jimbo Fisher. You're only talking about one year early anyway, because Fisher is contractually set to take over on 1/1/2011, or the university must pay him $5 million. Bowden is not going to catch Joe Paterno in the all-time victories race, so why prolong the agony? If FSU finishes 6-6, or worse, this off-season won't be very comfortable for Bowden if he hangs on for that last year. It's time for Bobby Bowden to take one for the team. Go ahead and ride off into that Florida sunset.
Posted by Sports Dawg at 11:53 AM