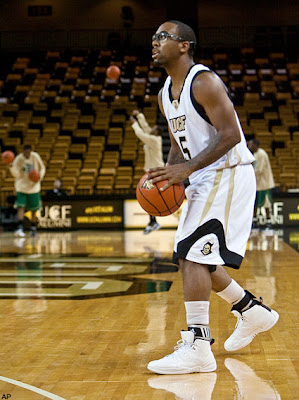 Central Florida is in the final year of a five year contract with Adidas. All coaches and players are required to wear Adidas footwear and apparel as part of the agreement. In return, CFU is paid big bucks and supplied with products. However, CFU has chosen to let one athlete sever their relationship with the German company. Marcus Jordan, son of Michael, refused to wear any shoes other than his father's Air Jordans. I completely understand the family loyalty. I know where the kid is coming from. Nevertheless, young Mr. Jordan is a part of a team now. He isn't under Dad's roof anymore. The college you chose wears Adidas, so therefore you wear Adidas. I only blame Marcus Jordan for appearing to be a somewhat selfish kid. I blame Central Florida for allowing him on the court wearing the Jordans. There's probably other kids on that team who would rather wear Jordans. After all, that entire age group has been spoon-fed the Swish logo all their lives. But if a player commits to CFU, it's the brand of the Three Stripes he will wear. And that should go for all Central Florida basketball players, regardless of their last name. Remember the T-Shirt: big T-E-A-M, little me. Shame on the team as well as the player.