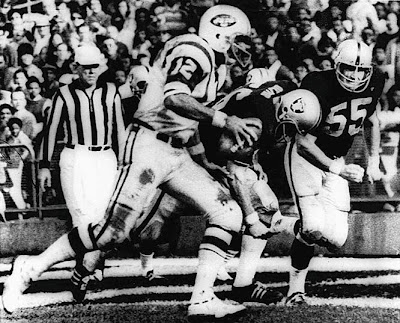 I'm sure most of the readers who come across An Opinion On Sports are waaay too young to have a clue about the AFL's infamous 'Heidi' game. Well forty one years ago today(1968), the New york Jets, led by Joe Willie Namath, played the Oakland Raiders in Oakland. The Jets appeared to have the game won 32-29 with 1:05 left on the game clock. With this in mind, the network left the game to begin televising the children's special Heidi. While off the air the Raiders scored twice in the final 42 seconds to pull off an unbelievable 43-32 victory. Afterwards, NBC was besieged with irate callers who were denied seeing the game in its entirety. In fact the calls were of such volume, they blew out the network's switchboards. Never again has a network left a close football game to go to the airing of another show. Who said football doesn't rule?
Posted by Sports Dawg at 1:42 PM