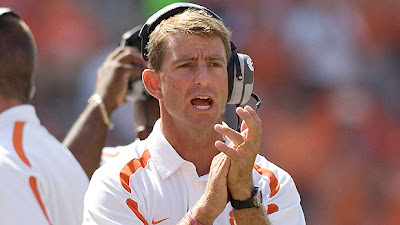 You want some incentives to do the absolute best coaching job you possibly can? Check these out. Dabo Swinney, the head coach at Clemson, is the lowest paid coach in the Atlantic Coast Conference at $800,000. His team is currently on the precipice of playing in its first ever ACC championship game. Big deal to Clemson, and perhaps a bigger deal to Swinney. You see, if his Tigers can win the Atlantic Division of the ACC, then his contract jumps to the conference median of $1.7 million. However, if his band of cats can win the ACC Championship, Mr. Dabo's annual income will escalate to $2 million. Now is that an incentive laden contract or what? In retrospect, Swinney would probably have taken the head job after Tommy Bowden was fired for half of that $800,000 base. He wanted it that bad. Heck, he wasn't even a coordinator at Clemson. But to word that lame contract in such a way that would give him the opportunity of becoming a member of the ACC $2 million club was borderline genius. But a guy who has had to go through life as "Dabo" deserves a couple of million. Nice going William Christopher Swinney. By the way, Swinney will turn 40 0n November 20th.
Posted by Sports Dawg at 4:00 PM