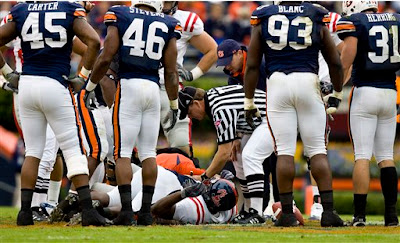 The really good news about the photo above is that Auburn's Zac Etheridge has been released from the hospital with no apparent paralysis. The other really great thing about the above photo is that Ole Miss running back Rodney Scott, who is lying under Etheridge, did not try to get up. He somehow sensed that Etheridge was seriously injured, and chose to remain on the ground beneath him. Both head coaches, Auburn's Gene Chizik and Ole Miss' Houston Nutt, praised Scott for his awareness and maturity. Especially when you consider that he is only a freshman.
Thanks in a large part to Scott's "lack of action", Etheridge is expected to make a full recovery. Now this is the kind of college football story that you like to hear about!
Posted by Sports Dawg at 1:04 PM