No Hansbrough, But Plenty of Go-Go 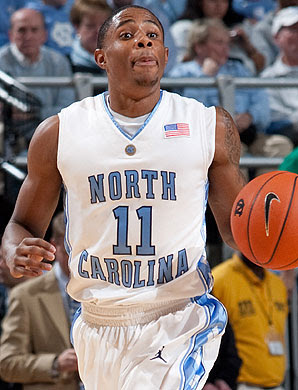 The 2009-10 edition of Roy Williams North Carolina Tarheels debuted last night against Isiah Thomas' Florida International Golden Panthers. UNC prevailed 88-72 in their first game in a long time without Tyler Hansbrough, Ty Lawson, and Wayne Ellington. Now we'll have to get use to new names like John Henson, Dexter Strickland, and Will Graves. They'll join existing lettermen Ed Davis, Deon Thompson, Marcus Ginyard, and Larry Drew (above). As you would expect, the young Tarheels were ragged, committing 26 turnovers. They'll become better as the season progresses at working together. Also, they will need to find a reliable, go-to , 3-point shooter to prevent defenses from sagging off and double teaming the likes of Thompson and Davis. But it is very early. The hustle, speed and quickness are all there again for the 'Heels. They will get to where they need to be, but it will take some time. Nevertheless, they won't be an easy opponent for anyone in the ACC.