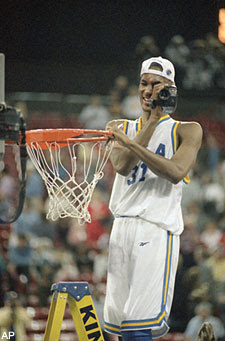 Ed O'Bannon has won Round One in his heavyweight match with the NCAA. A San Francisco judge denied the NCAA a dismissal this week in the class action law suit filed by the former UCLA Bruin. This is a big deal to the NCAA, as well as former college players like O'Bannon. For one, the NCAA is going to have to open its books to the public, allowing everyone to see how much money is being made on the "likenesses" of college athletes on video games (and it is one big chunk of cash). Furthermore, it could lead to these former collegians being compensated retroactively (and that's another chunk of cash). Just consider big plays portrayed on video games such as Christian Laettner's game winning shot against Kentucky in the NCAA tournament, or Vince Young's winning touchdown against Southern Cal in the Rose Bowl. These two guys, as well as, teammates and defenders in the games would be entitled to compensation.
This battle will wage on for quite a while because the implications and ramifications are broad. Stay tuned, this one might be a photo-finish before it's done.
Posted by Sports Dawg at 9:30 AM