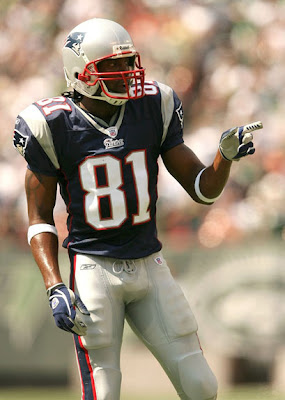 There is this old saying that goes like this: Don't bite the hand that feeds you. Well, if Randy Moss hasn't bitten the hand, he sure is nipping at it a little bit. He says he doesn't think he will be in New England after the 2010 season because the Patriots ownership isn't willing to pay the price to hold on to top talent. Pats' owner Robert Kraft begs to differ, reminding everyone he has paid Moss more that $20 million over the past two years. If I were the player, I would strive to have a great year this season and force management to cough up the big bucks to get me to stay. But then again, I guess it's all about talk and hype this time of year. There's another old saying in the South that begins: Frankly, Scarlet... Just let me know if I need to finish it for you.
Posted by Sports Dawg at 8:56 AM