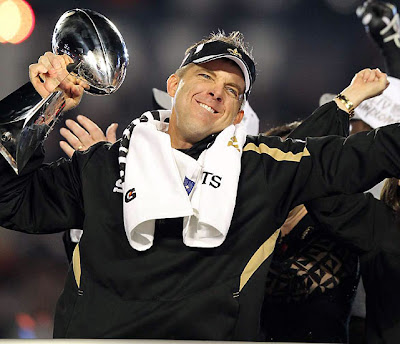 Sean Payton did not bring his New Orleans Saints to Miami to just play in the Super Bowl. No, he brought his Saints to Miami to win the Super Bowl. And win they did, defeating the Indianapolis Colts 31-17. In winning, Payton showed more play-calling guts than all other NFL coaches combined. The biggest of which was the on-side kick to begin the second half. Never would I have attempted that. If it fails you give Peyton Manning a short field to work with and all the momentum to carry him to his second Super Bowl victory. And Payton was asking his rookie kick-off man, Thomas Morstead to attempt his first on-side kick EVER. In fact, he only practiced the kick, appropriately named "Ambush", for less that two weeks. Yikes! But the gamble paid off, even if it did take 90 seconds for the officials to confirm "Saints ball". The Saints have their first Super Bowl victory and the city of New Orleans has yet another excuse to throw a party. Now we can all collectively say: "Great call, Coach!". You just gave new meaning to the phrase "in it to win it".