Muhammad Ali: "I Shook Up, The World!" 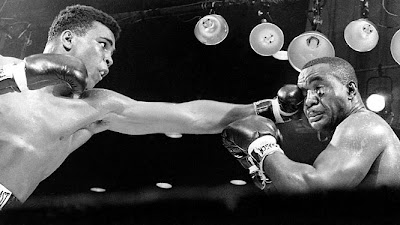 On February 24th, 1964 Muhammad Ali defeated Heavyweight Champion Sonny Liston when the champion failed to answer the bell for the seventh round. This was the fight when it was believed that an astringent was used on Liston's gloves to impair Ali's vision. Also, it was the fight that claimed the championship for Ali, and made the entire boxing world acknowledge him as a formidable heavyweight boxer. He was no longer just about his mouth, he was about skill and toughness in the ring as well. After the fight, he stood on the ring ropes and proclaimed "I am the greatest! I am the greatest! I'm king of the world!" Perhaps he really was.